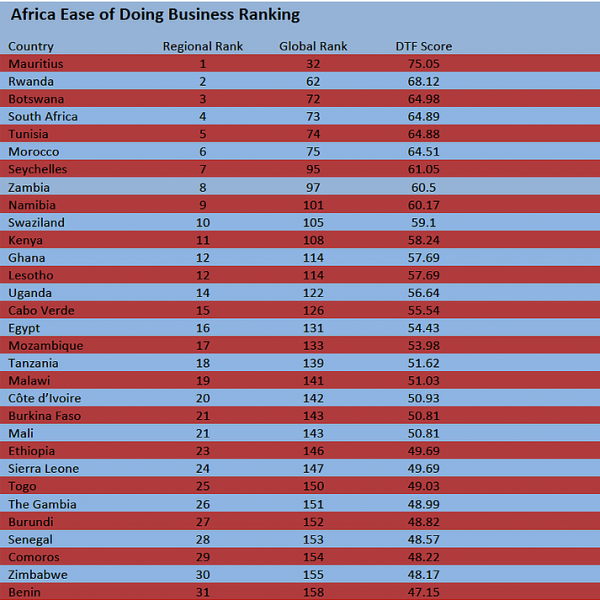 According to World Bank’s annual “Doing Business 2016” report titled “Measuring Regulatory Quality and Efficiency”, Africa is rising to become a great place to start your own business. One of the main findings of the report states, “Sub-Saharan Africa alone accounted for about 30% of the regulatory reforms making it easier to do business in 2014/15, followed closely by Europe and Central Asia. Members of the Organization for the Harmonization of Business Law in Africa were particularly active: 14 of the 17 economies implemented business regulation reforms in the past year—29 in total. Twenty-four of these reforms reduced the complexity and cost of regulatory processes, while the other five strengthened legal institutions.”

Doing Business evaluated regulations influencing 11 areas of the life of a business. Ten of them are included in the most recent ranking on the ease of doing business: registering property, trading across borders, starting a business, getting electricity, dealing with construction permits, getting credit, protecting minority investors, paying taxes, enforcing contracts, and resolving insolvency. Improving those areas makes countries raise in the ranking.

Consequently, Mauritius, Rwanda and Botswana are holding the leading positions of the Africa Ease of Doing Business Ranking. For example, Mauritius reduced the time dealing with the permits through hiring of a more efficient subcontractor to establish sewerage connections. Now it takes on average 6 days to start a business, 14 days to register a property, and 81 days to get electricity. On the other hand, Botswana demonstrates a political stability over the years what helped it to take a 3rd place in African and a 72 place in global ranking. Speaking about Rwanda, it was ranked 2nd best globally when it comes to ease of getting credit.

The ranking below lists best countries in Africa which should be considered as a place to start or expand a business.