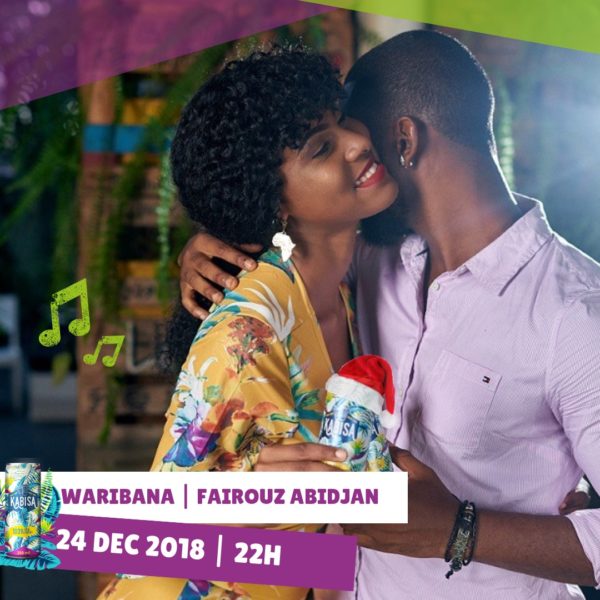 As one of the leading energy drinks in Ivory Coast, KABISA is now actively sponsoring some top events in Abidjan to reach as many Ivorians as possible! We are getting bigger and bigger and in order to match the European energy drink brands and generally all the largest energy drink companies worldwide, it’s time to highlight our presence in the clubs of Abidjan!

On Christmas Eve we had the pleasure of sponsoring an amazing event hosted by the Fairouz Club in Abidjan – Waribana Party! You probably wonder what it is! The concept was imported from Lebanon by people who lived or spent their childhood in African countries. What a night it was! It all looked wild and truly African! There were two international DJs, who instantly stole Ivorians’ hearts with some electrifying music! People went crazy about our tropical energy drink! Bartenders served some special drinks with KABISA and it worked out so well! Those who already knew and tasted our energy drink encouraged others to try and due to that we had our hands full that night! We decided to ask people what they think about KABISA. The feedback we got was incredible!

“Polish energy drink? You guys are from Poland? Wow, I’d never have guessed! The design of the can looks truly African! I follow you on social media and I’m impressed! I come from Ghana, I spent my childhood in Senegal and then I studied in Nigeria, so I can easily compare. Senegalese energy drinks brands or the soft drink companies in Ghana usually don’t have any idea for marketing and that’s why they fail. And energy drinks in Nigeria market? Well, they sell products on a large scale, but lack creativity. Whereas KABISA with this huge Kerozen campaign and those creative Facebook posts… you guys rock!” – says Victoria. And her friend Mawuli adds:

“Wow, boost drink manufacturer from Poland, Europe… here in Ivory Coast… Nice! I love the taste! It’s very refreshing! I’ve never tried KABISA before, but I heard about it. I think it’s among the energy drinks South Africa sells, right? And of course I’ve seen the TV commercial and billboards with Kerozen around the city. I’m happy I can finally try it!”

Yes, you’re right Mawuli! We are present in numerous African countries and South Africa is among them. Yet still there are some markets that miss out on KABISA: we still are not present on the list of beverage companies in Tanzania, but it is on our to-do-list! What’s more, we want to become one of the leading energy drinks in Dominica and start a massive energy drink production Cabo Verde has never seen! If you like KABISA – keep your fingers crossed for us! And Ivorians – don’t worry! We are still going to serve our best energy drink in the clubs and collaborate with the coolest events in Ivory Coast, so everyone can fall in love with KABISA!

This website uses cookies to improve your experience while you navigate through the website. Out of these cookies, the cookies that are categorized as necessary are stored on your browser as they are as essential for the working of basic functionalities of the website. We also use third-party cookies that help us analyze and understand how you use this website. These cookies will be stored in your browser only with your consent. You also have the option to opt-out of these cookies. But opting out of some of these cookies may have an effect on your browsing experience.
Necessary Always Enabled
Necessary cookies are absolutely essential for the website to function properly. This category only includes cookies that ensures basic functionalities and security features of the website. These cookies do not store any personal information.
Non-necessary
Any cookies that may not be particularly necessary for the website to function and is used specifically to collect user personal data via analytics, ads, other embedded contents are termed as non-necessary cookies. It is mandatory to procure user consent prior to running these cookies on your website.
SAVE & ACCEPT